You’re probably familiar with the Song Contest as one of the longest-running and most cherished of all the Chatham traditions, but have you heard any of the vintage recordings of these tunes in the University Archives?  You’ll have a chance this weekend as Chatham’s Archivist Molly Tighe joins the hosts of WESA’s Rhythm Sweet & Hot for a chat and a spin around the vinyl grooves cut by PCW singers all the way back in 1947.

During this week’s live broadcast, which airs from 6:00 until 8:00 pm on 90.5 FM, Molly will chat with hosts and hepcats Mike Plaskett and Dale Abraham about a recently discovered recording of the Class of 1947 singing classic Song Contest tunes We Sing Hi-Ho, Charm Girl of PCW and PCW Progress. Since these swingy tunes are sure to make you slap-happy and to blow your wig (21st century translation= become very excited), we decided to dig around in the University Archives and pull out some Song Contest treasures to get everyone prepped and ready for the big show.

First, a little bit of history.  Chatham’s Song Contest dates back to 1921, when a competition between the classes was enjoyed so much that it became one of the most hotly anticipated traditions of every school year. Competitive Sing in the June 1921 issue of Sorosis

Read the full June 1921 issue of The Sorosis here: http://tinyurl.com/jl896qc

For many years the Song Contest was held in combination with Color Day and together the two traditions generated a whirl of class spirit.  The two events would occur during the fall semester after the first-year students had successfully completed their first round of exams and had sufficiently settled into college life (including learning all the favorite school songs!). Selected pages from the 1927-1928 Student Handbook including mention of Color Day, Song Contest, and song lyrics.

In 1928, song lyrics and music were compiled by the Song Book Committee into a song book. According to an article in The Arrow on November 22, 1944, each class would practice their songs daily, sometimes sending a secret operative to spy on the other classes to try to discover the competing classes’ performance plans.  On the day of the contest… Awaiting results of the Song Contest, 1959

In the early years, the winning class was awarded a five pound box of candy. Later, the candy box was replaced with a silver cup. There’s no mention of recording any Chatham songs until 1946, when a contributor to the student newspaper implored her classmates to join forces to document their musical history.  She writes, “Without old college songs to sing while in the shower, PCW graduates can probably hold their job competently or cheer hubby after his hard day at the office, but it might be nice to have something specific to help them reminisce once in a while.” Editorial in a 1946 issue of The Arrow

Chatham University Archives maintains a healthy collection of LP recordings of Song Contest, no song recordings predate the late-1950s.  We couldn’t be sure if this 1946 editorial had spurred any action- until now! A recently unearthed 1947 recording was produced at George Heid Productions & Transcription Services in downtown Pittsburgh and features the same three songs performed at the Senior Dinner for the Class of 1947.  Could it be that the 1946 editorial inspired the creation of this recording?  Could it be that the students took a trip downtown on a streetcar to cut record of the winning songs from the Song Contest?  Could it be that this is one of those very recordings?  We think so!

The recording, which you can hear when you tune your radio dial to WESA 90.5 from 6:00 until 8:00 pm this Saturday night, may very well be our earliest recording of a campus tradition that spans decades and even continues through to today (Click here for a video of the 2014 song contest).  We hope you’ll tune in!

Can’t wait for the show?  Want to prepare for a sing-along?  Here’s the music and lyrics to a couple classic Chatham tunes. 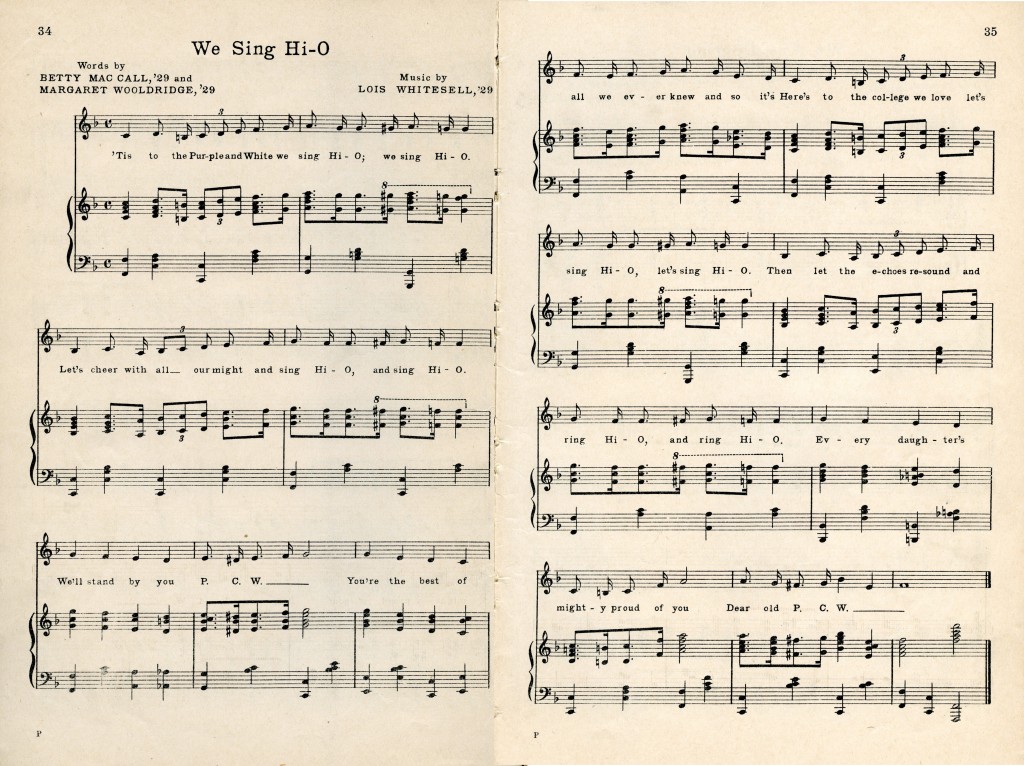 We Sing Hi-O, words and music by members of the Class of 1929 Still hungry for more?  Come by the University Archives in the JKM Library on Monday from 1-5 or Thursday from 1:30-3:30 to chat with Chatham Archivist Molly Tighe about the Song Contest or any of your favorite Chatham traditions!