As access to cultivatable land becomes increasingly constrained due to overpopulation and urbanization, new technologies are positioning indoor agriculture as a viable and sustainable way to produce food now and into the future.  Indoor agriculture is a fitting solution to scale up food production in developed and developing countries alike and, considering input, promises to be the most productive agricultural system available to today’s farmers.

So what is indoor agriculture?

Indoor agriculture is marked by these characteristics: efficient use of vertical space, intensive production, and control of plant environment through precision application of nutrient solution and irrigation.  Indoor farms are generally soilless systems that thrive in a highly controlled environment and thus perform very well indoors.

There are two types of soilless systems, hydroponics and a subtype of hydroponics, aeroponics that have been adapted and modified into vertical towers of layered growing.  So let’s take a moment to define each of these systems.

Hydroponics is a soilless cultivation technique that feeds plants with a nutrient rich water solution.  In a hydroponic system the roots of a plant will be supported by a medium such as sand, gravel, perlite, coarse vermiculite or rock wool.

Aeroponics is a version of hydroponics in which the plants roots are suspended and misted with a nutrient rich solution.  Aeroponic systems are usually towers with growing pockets instead of stacked surfaces used in hydroponics.

There is a third system, called aquaponics that integrates the cultivation fish into a hydroponic setup.  Due to the increased complexity of this system, this post will not cover aquaponics.

In 2013, Chicago’s O’Hare International Airport became the first airport to incorporate an urban garden into one of its terminals.  The garden consists of 26 aeroponic towers that in total can support over 1,100 plants that are used in several of the airport’s restaurants.  The airport claims that the addition of this intensive garden is an explicit commitment to its sustainability Nuvege, or the English translation, Green Green Earth, is a vertical farm based in Kyoto Japan that has set itself apart from competing hydroponic farms by its proprietary lighting network. The Nuvege facility is a 30,000 square foot building but claims over 57,000 square feet of vertical growing surface by stacking hydroponics. 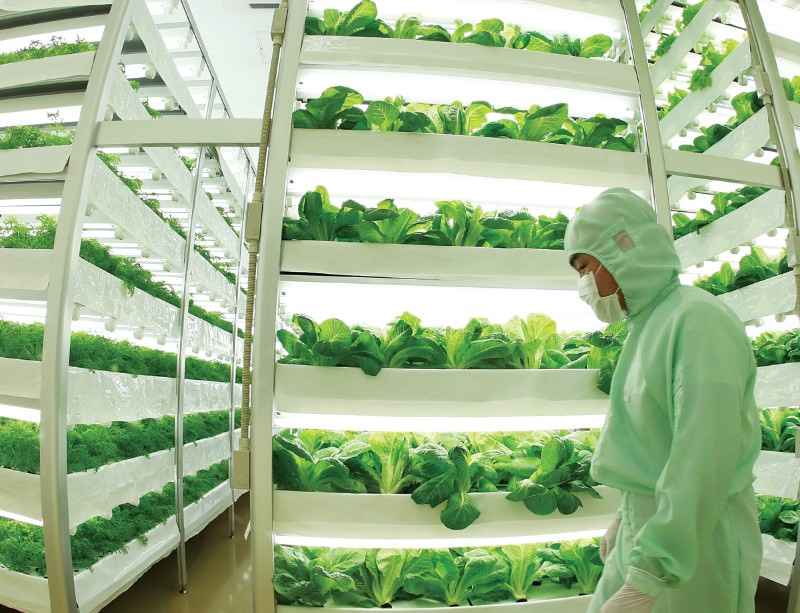 It can be argued that indoor agriculture is highly productive, conservative of water, and protective of the environment due to its ability to trade gross application of inputs for precision management.  But there are tradeoffs, of course, in the adoption of such an intensive production system. Let’s take a look at some of the pros and cons of indoor agriculture.

Here are some additional sources about indoor agriculture: